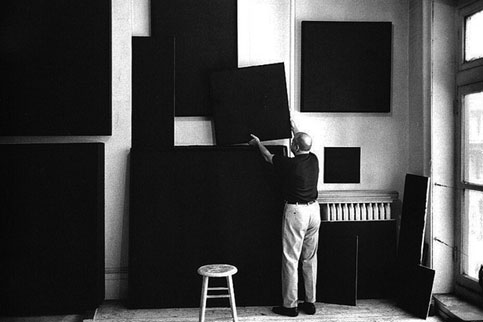 Adolph Frederick Reinhart, known as “Ad” Reinhardt, was an Abstract painter active in New York from the 1930s through the 1960s. A member of the American Abstract Artists, he was part of the movement that became known as Abstract Expressionism and was a major influence on cenceptual art, minimal art, and monochrome painting. Most famous for his “black” or “ultimate” paintings, taking minimalism and monochrome to the last degree. Robert Storr recently curated at the David Zwimer Gallery a major exhbition of Reinhardt’s black paintings, cartoons, and photographic slides, the first since MoMA’s 1991 retrospective of the artits works., which featured an entire room given over to his black paintings. French from curating this exhibition in the fall of 2013, he has chosen to speak about the artist and “institutional critique.” The Arts Arena is delighted to welcome Robert Storr for the sixth time.

Robert Storr is the Dean of the Yale School of Art. Curator, artist, author, and scholar, he has been Senior Curator for Contemporary Art at MoMA, the Commissioner of the Venice Biennale (2007), the only American invited to that position, and is widely considered one of the most influential voices in contemporary art today. Honored by the French government as Officier des arts et des lettres, Mr. Storr is a member of the Arts Arena Advisory Council.