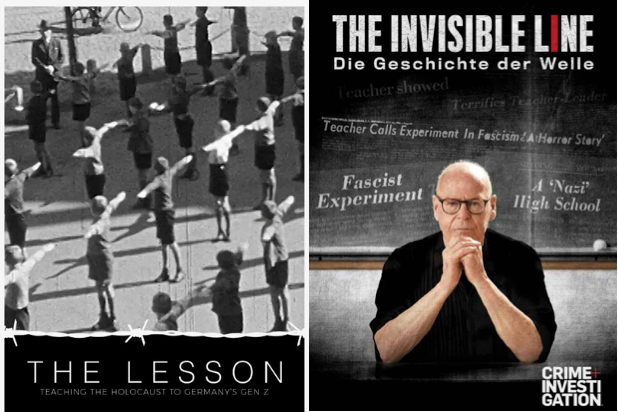 Films available for free online viewing May 15-17
Conversation with the filmmakers, May 17 at 19:30 CET

To view the films, please write to rsvp@artsarena.org.
To join the May 17 conversation, register here.

Have you ever wondered how people can take as true wild conspiracy theories, follow a cult blindly, adopt radical ideologies, or pin their faith on what a leader says over what their own eyes see and their ears hear? Even people who should know better? The selected films – The Lesson and The Invisible Line – America’s Nazi Experiment – address these questions. That both are documentaries makes their findings all the more alarming.

Due to Covid-19 restrictions on in-person gatherings in France, we are presenting this year’s UNAFF/TFF in a unique format.

In order to allow students in Stanford University’s Camera as Witness Program to watch the Q&A, the May 17 conversation will begin a half an hour later than our usual slot.

Film Descriptions
The Lesson
Germany, UK, 2020, 72 minutes
Director Elena Horn
At the age of 14 every German child in school is brought face to face with the reality of the Holocaust, many for the first time. The Lesson follows a group of them in the town of Frondenburg over four years, showing how complex this issue remains when concurrent to this formal education, the students are given conflicting ideas from their gym coach, exposed to local nascent far-right elements in the form of Neo-Nazi football hooligans, and some even discover confusing familial links to Nazism. Throughout the film, an overlay of archival footage depicts genuine Nazi educational techniques on children no different from those educated today. Focusing on average citizens, The Lesson brings to light the powerful truth that it is ordinary people–the “bystanders”–who allowed the rise of Nazism and exposes how easily far-right movements can get a grip on a society.

The Invisible Line
Denmark, Germany, US, 2020, 53 minutes
Director and Producer, Emanuel Rotstein
The Invisible Line was a school experience, as its subtitle indicates “America’s Nazi Experiment.” It ended badly. History teacher Ron Jones, who will be with us for our Q&A, did an unusual experiment with his class. Seeking to explain how Hitler brainwashed the Germans, skeptical high school students were subjected to a Nazi-like code of conduct. The five-day experiment spiraled out of control, attracting hundreds of students to the rising fascist movement, the so-called “Third Wave.” The 1967 experiment would become a global scandal resonating in print, screen and stage adaptations, including the well-known TV movie, The Wave. In an all-too-timely reassessment of this experiment gone awry, Jones, his wife, and original pupils reunite to share their troubling memories and reflect on the trauma and regret that haunt them still.