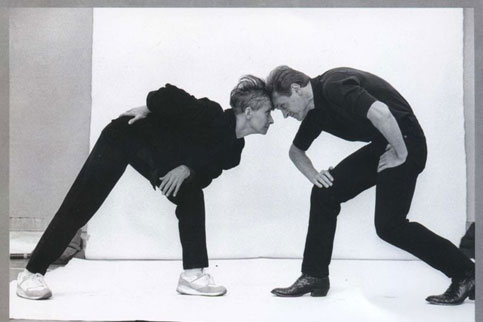 In collaboration with the Cinémathèque de la Danse, the Arts Arena is pleased to announce the screening of two remarkable films featuring two remarkable dancers, Twyla Tharp and Mikhail Baryshnikov. This Epiphany day screening inaugurates a series of dance films to be shown the first Sunday of the month at 11h30. ArtsArena PLUS: Free for Arts Arena members with reservations. General public: The Cinémathèque will sell tickets at the price of 6,50 euros. www.cinematheque.fr.

This opening program pays tribute to two giants of dance. Tharp, one of America’s most brilliant dancers and choreographers, with a rare originality and innate sense of insolence, mixes a post-modern minimalist style with that of Broadway musicals. In Making TV Dance (1978), she invents “video dance” avant la letter, juggling choreographic space and cinematographic space, composing a puzzle where dance and image play out an intense rivalry, reminding us that she also choreographed Hollywood films such as Hair, Ragtime, and Amadeus. In Baryshinikov by Tharp, the great classical ballet star opens himself up to a mixture of genres (also characteristic of American music hall). In The Little Ballet, Siantra Suite, and Push Comes to Shove, he shows his ease in moving from classical dance to jazz and contemporary dance, his physical strength and feline power everywhere in evidence; the entire performance shot with the amazing eye of Don Mischer. For further information, www.lacinemathequedeladanse.com