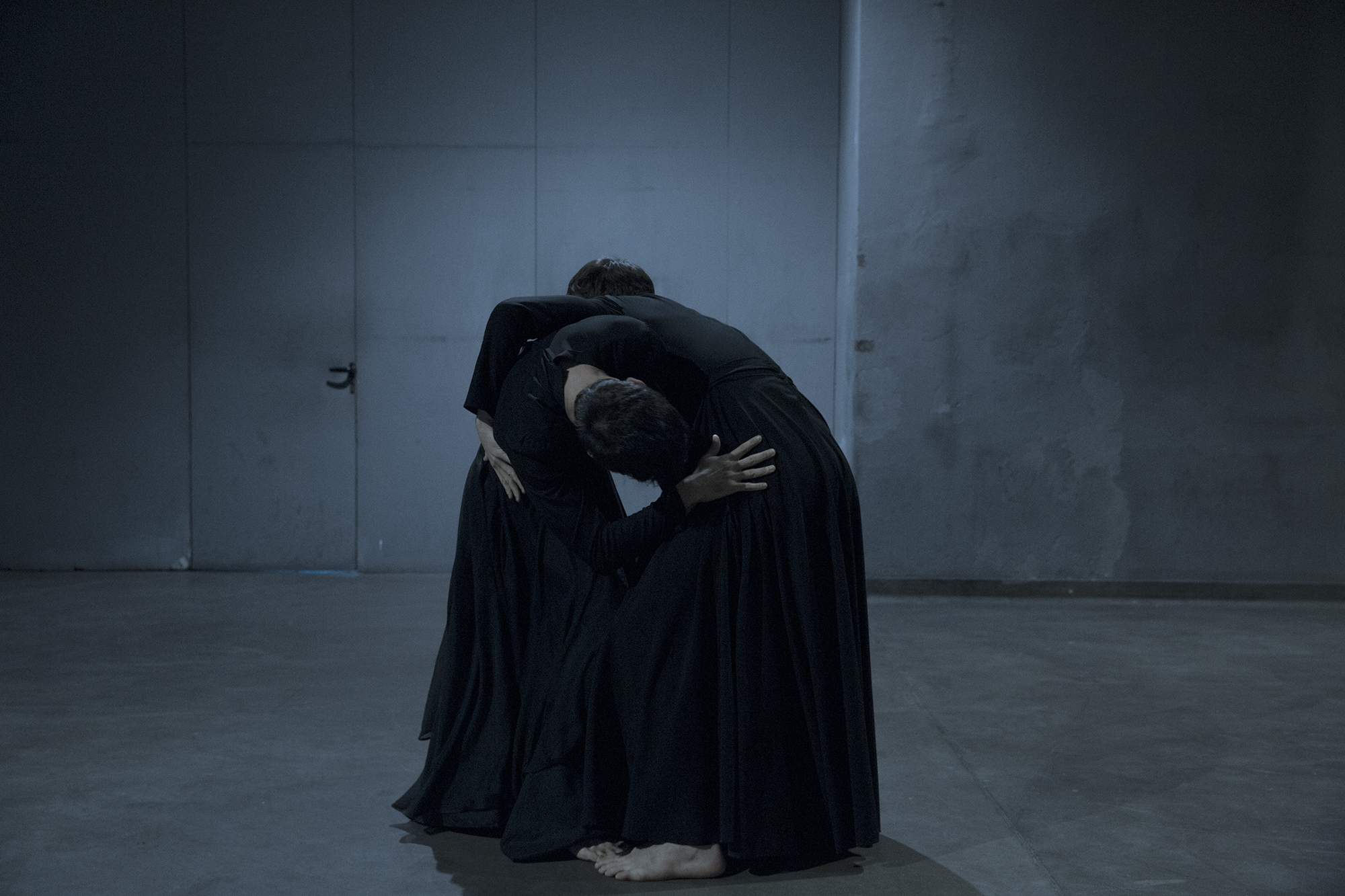 THEY, a two-man choreography by Marianna Kavallieratos We are honored that Bob Wilson will be with us for this performance to celebrate his 80th birthday on October 4.

Marianna Kavallieratos is a choreographer and dancer from Athens, Greece who has worked with Robert Wilson for decades. Wilson himself selected her work for our 2021 Watermill Performance.  Ms. Kavallieratos studied contemporary dance at the London Contemporary Dance School and SUNY Purchase, New York as well as studying the Martha Graham Technique, at Graham Studios, NYC. While living in New York in the 90’s she met Robert Wilson, becoming one of a group of young artists who collaborated in founding and shaping The Watermill Center on Long Island. She has maintained a strong physical and creative presence at the center ever since, as a mentor and teacher of dance and movement, and has collaborated and performed in many Robert Wilson productions including: T.S. Eliot, Une Femme Douce, Persephone, The Days Before DDD III, Wings on Rock, Prometheus, Alcestis (the opera), Relative Light and Odyssye. On her return to Europe, she danced for Kobalt Works in Brussels for several years, before returning to Athens, where as well as working as a freelance choreographer for clients including The Greek National Theatre, she has so far choreographed and presented four full length works of her own (previously under the name Klokworks) which are: Moment (Athens Festival 2010), Auto Run (Athens Festival 2012), Recalculate(Onassis Cultural Centre, Athens 2013) and Stations (Athens Festival 2014).

Nikolas Chatzivasileiadis, dancer, graduated from Drama School “Ebros – Theater Laboratory” in 2011 and from the National State School of Dance (K.S.O.T) in 2016.  He has worked with great theater directors such as Ektoras Ligizos, Thanos Papakonstantinou, Anna Makraki, Froso Litra and Giannis Kakleas., participated in the National School Of Dance performances “Open studio- Black Box,” and worked with the Hellenic Dance Company (“Open Frontiers”, Athens and Epidaurus Festivals [2015], Music Hall [2014], “Fragile Matter-Juxtapose”, Music Hall [2016], “Tomorrow”, Music Hall [2016]), with Anastasia Valsamaki (“Sync”, Athens Festival , Aerowaves-Spring Forward (Denmark) [2017]), with the team Krama Dance Company (“a.m” Art Factory [2017]), with Millicent Hodson & Kenneth Archer (‘La Creation du Mode”, Music Hall [2018]), with the team Syn-kinisi Contemporary Dance (“Simiosis”, Municipal Art Gallery of Chania [2018]) and with Ιnt.P Dance Co (“Puzzle(D)”, Kinitiras and ARC for Dance Festival 11 [2018]). In March 2019, he participated in choreographer’s Athanasia Kanellopoulou performance “exodus”, which was presented in Roes Theatre, Ramallah Contemporary Dance Festival and Dance Days Chania 9.  In 2020, as part of Dance Days Chania Festival 10 “New creator in the city” he participated in the work of Ioulia Zacharaki “Into the Flux: Jungle.” In 2020, as part of Arc for Dance Festival 13, he created and presented his first personal work “3 and a HALF”.  This year, at Patras Art Festival (PAF), he presented his self-composed work “-Not now. -But when?”.

Alexandros Stavropoulos, dancer, graduated from the State School of Dance in 2014. In 2015 he attended the Intensive corse of Martha’s Graham technique in New York and in 2016  received his Master’s degree at the PLACE School of Contemporary Dance of London. He has collaborated with choreographers such as Russell Maliphant, Jasmin Vardimon, Koen Augustignen, Rosalba Torres Guerrero, Hannes Langolf, Andonis Foniadakis, Tono Lachky,Ermira Gkoro, Fotis Nikolaou, Marianna Kavalieratou etc.   In 2020 he made his first choreographic work \”Cinderella’s\”  selected for the Aerowaves Festival 2021.