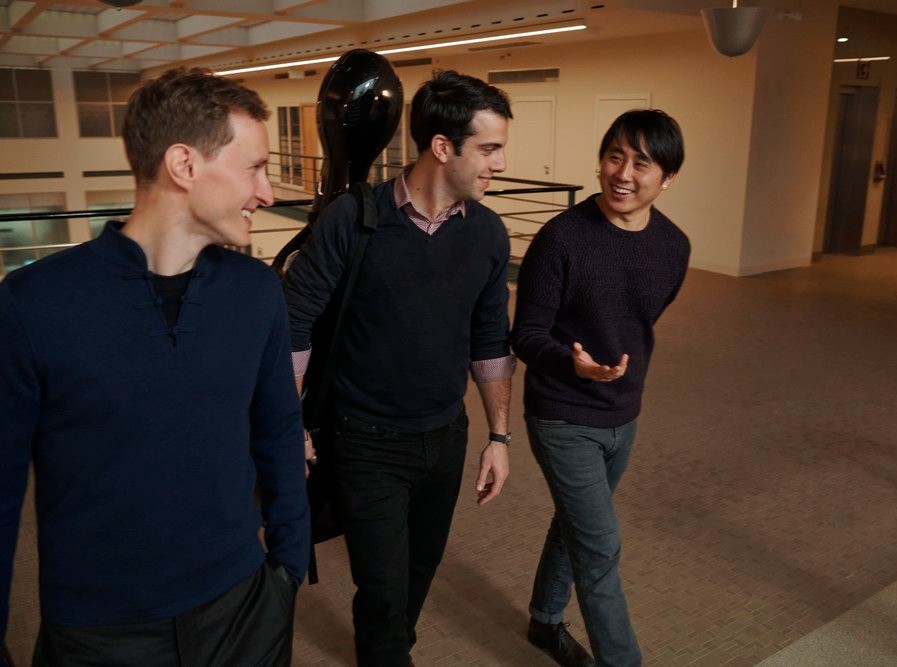 Violinist Josef Špaček, cellist Timotheos Gavriilidis-Petrin, and pianist George Xiaoyuan Fu are distinguished alumni of the Curtis Institute of Music. In demand across Europe and the U.S. as soloists, chamber musicians, and recitalists, they now form an inimitable ensemble with repertoire spanning Romantic masterworks to today’s most lauded composers. They are also active composers, adventurous and multidisciplinary collaborators, and passionate advocates for the impact of music on global communities. Before officially founding Trio Zimbalist, the three musicians gave a spectacular performance at the Arts Arena in 2021. We are delighted to welcome them back now that they have formally joined their musical forces in this superb trio.

Josef Špaček
Praised for his remarkable range of colors, his confident and concentrated stage presence, his virtuosity and technical poise as well as the beauty of his tone, Josef Špaček has emerged as one of the leading violinists of his generation. He has appeared with major symphonies in Europe and Asia and has collaborated with renowned conductors, including Arts Arena Board member James Conlon. His recording of the violin concertos of Dvorak and Janacek was The Sunday Times’s “Recording of the Week, MusicWeb International’s “Recording of the month and of the year,” and received a 5-star rating in Diapason. As The Sunday Times wrote: “..in this repertoire, Špaček is second to none today.”
Josef Špaček studied with Itzhak Perlman at The Juilliard School in New York, Ida Kavafian and Jaime Laredo at the Curtis Institute of Music, and with Jaroslav Foltýn at the Prague Conservatory. He was laureate of the International Queen Elisabeth Competition in Brussels, and has won other top prizes internationally, in addition to serving as the youngest concertmaster in the history of the Czech Philharmonic Orchestra.,br>

George Xiaoyuan Fu
Described by the Boston Music Intelligencer as a “heroic piano soloist” with “stunning virtuosity,” Chinese-American pianist George Xiaoyuan Fu has performed as a soloist with orchestras such as the National Symphony Orchestra, Baltimore Symphony, North Carolina Symphony, Tanglewood Music Center Orchestra, and the Curtis Symphony Orchestra, and has collaborated with conductors including Michael Tilson Thomas, Stefan Asbury, Kensho Watanabe, Vinay Parameswaran, and Jonathan Berman. He has appeared at venues such as the Kennedy Center, Carnegie Hall, Wigmore Hall, Kings Place, and Seiji Ozawa Hall at Tanglewood, while his live performances and interviews have been featured on public television and radio broadcasts around the world. He is also an active composer and performer of contemporary music.
After receiving a bachelors in economics from Harvard, he studied at the Curtis Institute of Music under Jonathan Biss and Meng-Chieh Liu, then at the Royal Academy of Music under Christopher Elton and Joanna MacGregor. He has also worked intensively with Pierre-Laurent Aimard on the music of Messiaen and Debussy, and is currently the Hodgson Piano Fellow of the Royal Academy of Music.

Timotheos Gavriilidi-Petrin
Greek-Russian cellist, Timotheos Petrin gained international recognition as a top-prize winner at the prestigious International Paulo Cello Competition in Finland, where he was praised for “a great and passionate soloist style: expressive, vibrant singing lines, sparkling rhythm.” In 2017, he was named Young Artist in Residence at the Performance Today radio program of the American Public Media, the most listened-to classical music program in the United States, where his recordings were received with great success.
In addition to his concert appearances, he is an advocate for charity and philanthropic causes. In the Spring of 2016, he collaborated with the non-profit organization ‘Podari.Life’ and the renowned Russian actress Chulpan Khamatova in performances to raise funds for children with oncological and hematology diseases.
Born into a family of musicians, he entered the Curtis Institute of Music in 2012 and studied with Carter Brey and Peter Wiley, receiving his Bachelor of Music degree in 2017. He is a scholarship recipient and fellow of the Onassis Foundation and currently studies at the New England Conservatory under the tutelage of cellist Laurence Lesser.