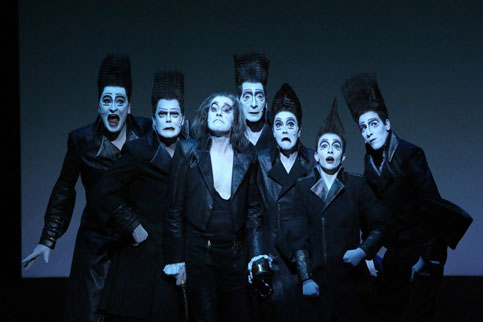 The great Swiss-born actor Stefan Kurt, who has starred in the Berliner Ensemble’s The Black Rider and The Three Penny Opera and made over 50 films, plays Captain Hook in Robert Wilson’s Peter Pan, which opens at Paris’s Théâtre de la Ville on December 12. Declared by Wilson as “my favorite actor in the whole universe,” Mr. Kurt will be in conversation with Arts Arena founder and director Margery Arent Safir.

“The first time I met Stefan Kurt,” she recounts, “I had been watching him on stage for several hours as a platinum blond, red-lipsticked Macke Messe, the Mack the Knife of The Three Penny Opera. It was the second time I had seen him in the role, so I could count some six hours of staring at Stefan Kurt. Yet when he came to our appointment backstage after the show, he had to come up to me and introduce himself. I absolutely could not recognize the man I had been watching onstage for hours. Now that, I thought, is a truly great actor.”

Video clips of performances will be shown. A reception follows.