Talking About "The Old Woman" 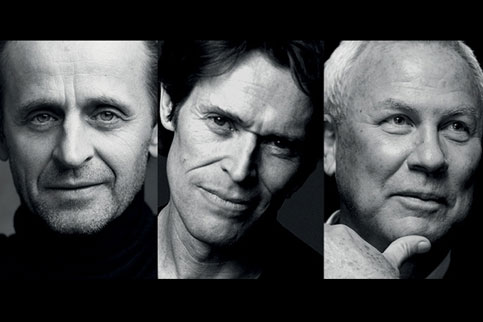 Through his signature use of light, his investigations into the structure of a simple movement, and the classical rigor of his scenic and furniture design, Robert Wilson has created productions that have decisively shaped the look of theater and opera since the 1960s and earned him recognition as one of the world’s major and most visionary artists. He is also known for his fascinating collaborations with leading artists from a range of disciplines.

This year, Paris celebrates Robert Wilson. In November, he will be directing famed dancer and actor Mikhail Baryshnikov and world-renowned actor Willem Dafoe in The Old Woman, an adaptation of the work by Russian author Daniil Kharms, at Théâtre de la Ville. Mr. Wilson will be the Louvre’s artist in residence from mid-November 2013 to mid-February 2014. In December, his Peter Pan with the Berlilner Ensemble will be at Théâtre de la Ville, and in January, his iconic opera with Philip Glass, Einstein on the Beach, will return to Paris at the Théâtre du Châtelet. In February, his Madama Butterfly will be at the Paris Opéra Bastille. Honored in France as Commandeur de la Légion d’Honneur, he is a member of the Arts Arena Advisory Council.

We are delighted to welcome back Robert Wilson for his fourth Arts Arena appearance, this time in the company of his stars Mikhail Baryshnikov and Willem Dafoe. Among other matters, they will converse about The Old Woman and about collaborations among strong peers. A reception follows.