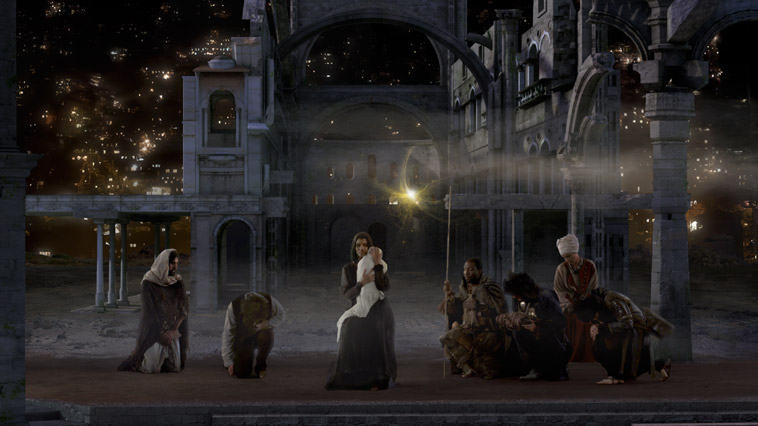 After previews at the Victoria and Albert Museum,the National Gallery, and Sotheby’s in London, The Arts Arena in association with Sotheby’s Paris is proud to present the first showing outside of the UK of Martha Fiennes’s moving-image artwork, Nativity. The projection/installation will be followed by an artist’s talk, a Q&A with the artist and Technical Producer Peter Muggleston, and a reception.

The work of filmmaker, director, writer, and artist Martha Fiennes sits in an evolving space between film, art, and technology. The sister of the famed actors Ralph and Joseph Fiennes, composer Magnus Fiennes, and filmmaker Sophie Fiennes, Martha Fiennes’s first feature film, Onegin, earned critical acclaim and a BAFTA nomination; her second, Chromophobia, was the closing night film of the 58th Cannes Film Festival. Both featured her brother Ralph.

In 2011, she began to use a pioneering form of computer technologies to create large-scale “filmworks” that extend the possibilities of film as a medium and art as an experience. Baptized SLOimage, the technolgies create a work that has neither beginning nor end, but rather creates self-generating images selected by algorithms in a computer code; an artwork that continually evolves, where constellations of light, objects, and characters change and do not repeat, and the artist herself is no longer able to determine the configuration or order of what we see. The result is mesmerizing. Nativity is projected as an artwork, with music by Magnus Fiennes.