CAN ART STOP A BULLET? 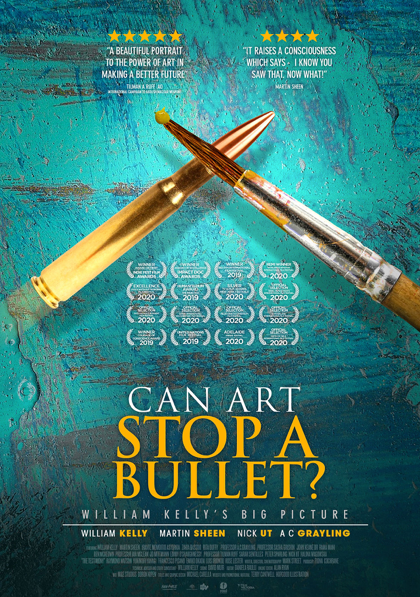 For the 11th year, the Arts Arena presents L’Europe autour de l’Europe for a screening and discussion. Founded in 2006 by Irena Bilic, the festival presents art films produced by the countries of Greater Europe with special attention to connections between classic European filmmakers and new talents of contemporary cinema. Among the festival’s guests of honor have been Agnès Varda, Carlos Saura, Jean-Claude Carrière, Jean-Pierre Léaud, Dušan Hanák, Jonas Mekas, and Márta Mészáros.

This multi-award-winning film is at once a documentary and thesis on the relationship between artistic expression and conflict. Australian artist William Kelly takes us through a history of humanity’s worst excesses and most depraved acts of violence, all executed through the prism of the artwork central to the film – the Big Picture.

Kelly’s “Big Picture” is a compilation of pieces made by him and seamlessly tied together onto a 12.6 x 1.65 meter roll, referencing historical events of war and brutality. The film is an account of its making.

Actor Martin Sheen, performance artist Rama Mani, philosopher A.C. Grayling, and photographer Nick Ut among others explore the relationship between art and activism and the power of images to affect real change: the reason why war-machine governments often feel threatened by artists.

As the world again faces unbridled violence in Europe, it is fully appropriate that The Arts Arena screen such a film.

Irena Bilic, Founder and Executive Director of the festival, will lead a Q&A, followed by a coupe de champagne.