Vocalists from the Curtis Institute of Music 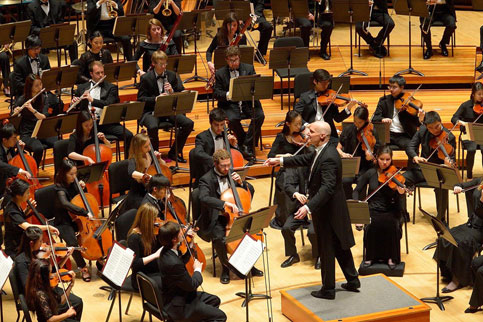 The Curtis Institute of Music educates and trains exceptionally gifted young musicians for careers as performing artists on the highest professional level. One of the world’s leading conservatories, Curtis has produced an impressive number of notable artists, from such legends as Leonard Bernstein and Samuel Barberto current stars Jonathan Biss, Juan Diego Flórez, Alan Gilbert, Hilary Hahn, Jennifer Higdon, and Lang Lang. Curtis On Tour is the global touring initiative of the Curtis Institute of Music, offering exceptional students professional performing experience alongside celebrated alumni and faculty. Since its founding in 2008, Curtis On Tour has traveled to 44 dstinations in Europe, Asia, and the Americas. For the second time, The Arts Arena is delighted to present Curtis On Tour.

This year’s concert is a vocal performance by mezzo-soprano Lauren Pearl Eberwein and tenor Spencer Lang. Accompanying them on the piano will be Mikael Eliason. Mr. Eliason has collaborated with numerous singers in recital, including Robert Merrill, Tom Krause, John Shirley-Quirk, and Sarah Walker, has recorded for major record companies, and offered master classes from Aix-en-Provence to the Shanghai Conservatory and Tchaikovsky Conservatory (Moscow). He has been associated with the Royal Danish Opera, the Opera Studio of Amsterdam, the Lyric Opera of Chicago, Los Angeles Opera, Houston Grand Opera, and the Metropolitan Opera. He was music director of the San Francisco Opera Center, artistic director of the European Center for Opera and Vocal Art in Belgium, and in 2013 was appointed artistic adviser to Opera Philadelphia. Ms. Eberwein studies with William Stone and has sung the roles of Tisbe in Rossini’s Cenerentola, Mother Marie in Poulenc’s Dialogues of the Carmelites, Dido in Purcell’s Dido and Aeneas, as well as other roles. She recently made her debut with Opera Philadelphia. Mr. Lang studies with Marlena Kleinman Malas and has sung roles in L’elisir d’amore, Rinaldo, The Magic Flute, among others. He has performed as a soloist with the Juilliard Orchestra, Juilliard 415, Northwest Sinfonietta, and sang the Pacific Lutheran University Orchestra.