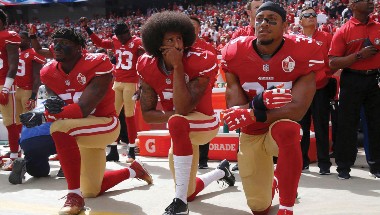 Each of the eight selected films will be followed by a Q&A with the filmmaker. All films are in English with French subtitles.

For a list of dates, times, films and synopses: www.artsarena.org/events

Following a back-seat tryst, Elena (Callie Hernandez) shares with her lover the strange tale of what led her to hide out in the deserts of New Mexico. A chance run-in re-unites her with Jessica (Ashley Denise Robinson), an estranged high school friend with secrets of her own. Together, director Pete Ohs and his four actors wrote the script for this darkly funny, whip smart chamber piece that defies both genre and expectations.

When popular NFL quarterback Colin Kaepernick decided to kneel during the national anthem in recognition of police brutality and the mistreatment of Black Americans, it started a media firestorm. Skillfully weaving together news reports with private interviews, co-directors Walker and Hockrow sketch a rich portrait of Kaepernick, revealing the steps that led to one individual’s personal protest and its complex and ongoing effects.

Near the Southern border, five Mexican-American lawyers specializing in immigration seek to help clients find safety and security in the face of personal and professional attacks. Brilliant and dedicated yet facing insurmountable odds, Araceli, Alma, Elizabeth, Gladdys and José try to support each other, sharing legal strategies as well as their daily struggles against burn-out and disillusionment.

On opposite ends of idyllic Sylvan Lake, in the American Northeast, two summer camps taught children swimming, arts and crafts, and… overthrowing capitalism? Founded by secular working-class Jews, Camp Kinderland was communist while competitor Kinder Ring, also called The Workmen’s Circle, was socialist. This lively documentary takes viewers inside a surprising feud for the hearts and minds of America’s youth.

Riley, a soon-to-be college graduate in New York City, goes to great lengths to win the affections of a boy from Philadelphia, her hometown. In the process, she confronts anxieties about her relationships with friends, lovers, and her biracial family, as well as her fears about impending future. Director Zauhar, who also stars in the film, has created a touching, revealing portrait of a generation trying to hang on to the easy-going vibe of her college years for as long as possible.

Thrilling, confident editing and pitch-perfect performances by family members retroactively turn filmmaker Paul Owens’ childhood home movies into an eerie, low-fi horror film. When Mason Owens learns that the New Jersey home where he grew up will be demolished, he returns to find that all is not as it seems.

Deep in the midwestern heartland lies the U.S.’s first majority Muslim city: Hamtramck, Michigan. A grassroots community campaign for mayor challenges 100-years of local Polish leadership. Will the contest drive the neighbors apart? Directors Feltman and Jafri offer an insightful, generous portrait of a city coming to grips with a changing America.

Dreams Under Confinement / 3′ / exp
As the sound of Chicago Police Department’s dispatch radio is combined with satellite geographical imagery, the prison and the street merge into a shared carceral landscape.
Halimuhfack / 4′ / exp
An actor lip-syncs to archival audio in which the author and anthropologist Zora Neale Hurston describes her method for documenting African American folk songs in Florida. As the film becomes increasingly abstract, the audio transforms into an incantation.
Reckless Eyeballing / 14′ exp
Taking its name from the Jim-Crow-era prohibition against Black men looking at white women, this hand-processed, optically-printed amalgam examines sexual desire, racial identity, and film history.

A country vacation. A city cookout. The loss of a loved one. The spread of a pandemic. The brightness of flowers, both real and fake. Choice morsels of documentary footage from the neighborhood of Bed-Stuy, Brooklyn, are augmented with filmmaker Su Friedrich’s wry observations and witty on-screen text in this casual, engrossing portrait of daily life.

Red, a runaway in the 1980s, returns to the outskirts of her Northern California hometown to track down her wayward father. Along the way, she falls in with a young drifter in this grungy, politically subversive mix of narrative, documentary, and trash B-movies about the underbelly of America. Charnoski skillfully moves the film from harsh, even brutal realism to flights of surrealism and beyond.