The Book of Kells - The Work of Angels 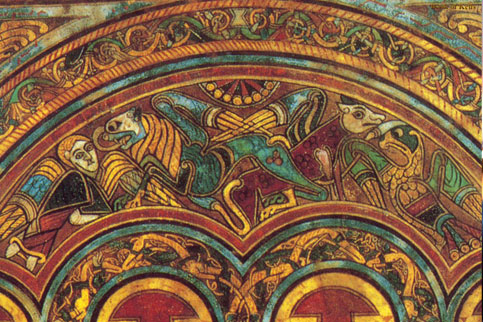 As the closing event of the 8th European Film Festival L’Europe autour de l’Europe, this year featuring Ireland, the Arts Arena screens the documentary film The Book of Kells – The Work of Angels? In wonderfully lavish cinematography, this epic documentary explores how this greatest Irish manuscript to survive from the middle ages came to be made on the edge of the then-known world. Ranging across Ireland, the Scotish Hebrides, and as far away as Coptic Egypt, it traces the combined influences of the east with Celtic and Pictish craft traditions in metal working and stone carving to create this most glorious achievemnt of artists, scribes, and scolars. The Book of Kells: A work so astonishing in its elaboration that for centuries it was considerd to have been the work of angels. Director, Murray Grigor. Producer, Louis Lentin. Photogrphay, Seamus McGarvey (Atonement, The Hours) Oscar nomination, Academy Award & BAFTA. Music, Michael McGlynn performed by ANUNA. Nominated for a BANFF Award and a New York Festivals Finalist. Screening and discussion with festival director Irena Bilic.