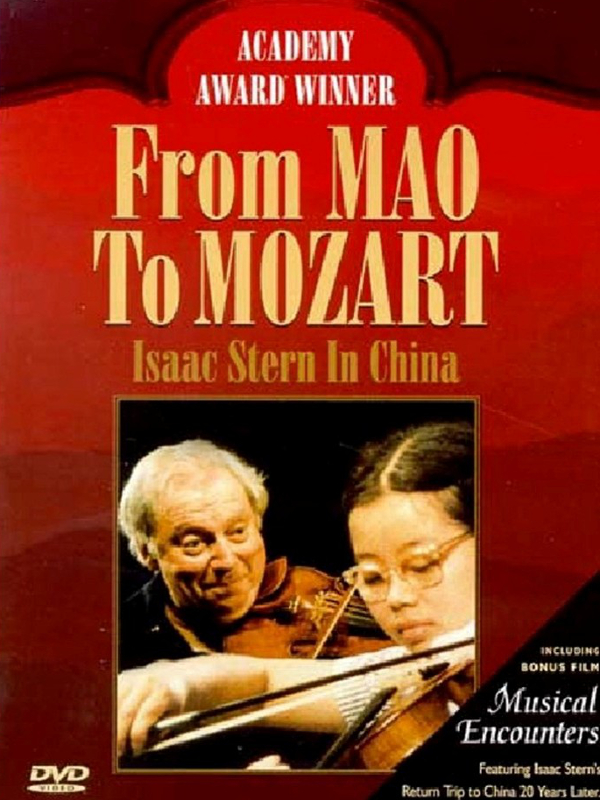 Due to the new recommendations put in place by the French government, we will not be able to have any live audience for this event. The event will still be livestreamed, so you will be able to join us from your home. You can register for the livestream of this event here.

Isaac Stern’s centenary is being celebrated in 2020. As part of this centenary celebration of the world-famous violinist, his son David Stern, founder and conductor of Opera Fuoco, will talk about his father and present a screening of the Academy Award-winning film, From Mao to Mozart: Isaac Stern in China. This event is in conjunction with a concert in honor of Isaac Stern on October 1 at the Philharmonie de Paris.

Born in the Ukraine, Isaac Stern was brought to the United States at age 14 months and went on to become one of the world’s most distinguished violinists. His repertoire was immense, and in a career of more than 60 years, he performed and recorded virtually the entire classical violin repertoire, many of the great violin concertos of the 1930s, and also contemporary works, a repertoire that ranged at minimum from Vivaldi to Dutilleux. Of Isaac Stern, Baker’s Biographical Dictionary of Musicians writes, “Stern remained faithful to the creed of those virtuosos to whom fame is a natural adjunct to talent and industry.”

Isaac Stern was also a gifted and generous mentor. Hearing Yo-Yo Ma and Pinkas Zuckerman play when they were children, he recognized their exceptional talent and went on to support their career and give them performing opportunities. Stern was as well a dedicated and strong advocate of cultural enrichment, the role of the arts in society, and of human rights. When the historic and world-renowned Carnegie Hall was threatened with demolition in 1960, Stern spearheaded the effort to save it and thereafter served as its president. In Israel, he supported projects that include the America-Israel Foundation and the Jerusalem Music Center.

Even Hollywood was a destination for Isaac Stern, who dubbed on-screen appearances by actors impersonating violinists, most notably in Fiddler on the Roof. The film about his historic trip to China during the Cultural Revolution—From Mao to Mozart: Isaac Stern in China—received an Academy Award.

Among his many honors, Isaac Stern was named Officier de la Légion d’honneur in France, received the Kennedy Center Honors Award in the U.S., and the Wolf Prize in Israel. In 1992, he was awarded the Presidential Medal of Freedom, the United States’ highest civilian award, given to individuals who have made “an especially meritorious contribution to the security or national interests of the United States, world peace, cultural or other significant public or private endeavors.”

David Stern, like his father, has made his life in music, with a career of musical leadership that spans three continents. He is the founder and director of Opera Fuoco, the Paris-based international opera company and young artist program dedicated to lyric repertoire from the mid-18th century to the present, chief conductor of the Palm Beach Opera in Florida, artistic adviser and chief conductor of the Shanghai Baroque Festival and director of the newly founded Heifetz Baroque Program in Staunton Virginia. Since 2016, he has been co-chair of the jury of the Shanghai Isaac Stern International Violin Competition. Whether conducting a romantic opera, a baroque oratorio or a classical symphony, teaching vocal master classes or defending cultural activities, David Stern shares with colleagues and audiences his strong musical convictions and his belief that music is relevant and indeed essential in today’s world.